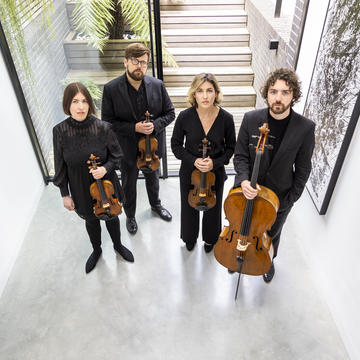 The Castalian String Quartet holds the Hans Keller String Quartet Residency at the Faculty for the academic years 2021-24. The residency is established in memory of the musician, writer and broadcaster Hans Keller, and the Quartet aims to promote his work in relation to the string quartet.

The Quartet will integrate a diverse range of creative projects with an annual concert series. Over the course of their residency, their recitals will feature masterpieces from the string quartet canon but also emphasise the work of marginalised composers.

Programming choices will feed into education and outreach initiatives, offering stimulating material for school workshops and interdisciplinary explorations. The Quartet aspire to develop the chamber musicians and composers of tomorrow through masterclasses, private lessons, and on-stage and off-stage collaborations.

The Quartet’s projects will also feed into academic research within the Faculty of Music, through pre-concert talks and public seminars which cover topics relating to the work of our academics, including Professor Laura Tunbridge’s Major Research Fellowship from the Leverhulme Trust, A Social and Sonic History of the String Quartet.

Many of the residency activities are open to the public, with the aim of engaging and building an audience beyond the traditional concert setting.

The Castalian String Quartet is taking the international chamber music scene by storm. They are gaining renown for interpretations “full of poetry, joy and sorrow, realised to such perfection” (The Observer).

Formed in 2011, the quartet studied with Oliver Wille at the Hochschule für Musik, Hannover, before being selected by the Young Classical Artists Trust (YCAT) in 2016. They were awarded First Prize at the 2015 Lyon International Chamber Music Competition and in 2018 were recipients of the inaugural Merito String Quartet Award and Valentin Erben Prize, and a prestigious Borletti-Buitoni Trust Fellowship. The ensemble was named Young Artist of the Year at the 2019 Royal Philharmonic Society Awards.

Recent debuts include New York’s Carnegie Hall, the Berlin Philharmonie, Vienna Konzerthaus, Hamburg’s Elbphilharmonie, Paris Philharmonie and the Concertgebouw in Amsterdam. The Castalian String Quartet performs frequently at the Wigmore Hall in its home city of London. In 2018 they recorded Haydn’s Op.76 quartets for the Wigmore Live label and were joined by pianists Stephen Hough and Cédric Tiberghien, violist Isabel Charisius and clarinetist Michaels Collins for a Brahms and Schumann series in the 2019-20 season. Their next Wigmore Hall cycle will feature all three quartets by Benjamin Britten. The quartet often appears at festivals such as Spoleto USA, Aldeburgh, North Norfolk, Cheltenham, East Neuk, Lockenhaus and Heidelberger Frühling. Recent and upcoming premieres include works by Charlotte Bray, Edmund Finnis, Mark Simpson, Simon Rowland-Jones and Sir Mark-Anthony Turnage.

The Castalian String Quartet’s 2022 release Between Two Words (Delphian Records), presenting music by Orlando di Lasso, Thomas Adès, Ludwig van Beethoven and John Dowland, was given a double five-star review as BBC Music Magazine’s ‘Album of the Month’: “this outstanding disc offers listeners a true philosophical journey…a series of intricately connected works, each performed with rare beauty and originality by a quartet at the height of its powers…[the Heiliger Dankgesang from Beethoven Op.132] is nothing short of a revelation in its lucidity of line and sheer beauty of sound.”

The quartet’s name is derived from the Castalian Spring in the ancient city of Delphi. According to Greek mythology, the nymph Castalia transformed herself into a fountain to evade Apollo’s pursuit, thus creating a source of poetic inspiration for all who drink from her waters. Committed to inspiring a diverse audience for classical music, the Castalians have performed everywhere from the great concert halls to maximum security prisons and even the Colombian rainforest.

The Faculty are grateful for the generosity of The Cosman Keller Art & Music Trust for their donation to the Castalian String Quartet to support the residency.