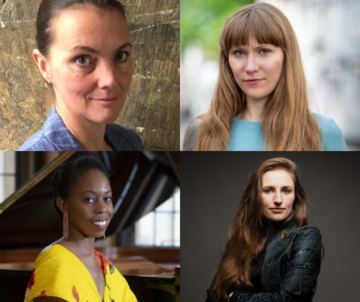 For International Women's Day 2022, the Faculty is delighted to celebrate a few of our academics who, through their talks/performances and recordings, are helping to showcase the lives and works of many underrepresented women composers.

Dr Samantha Ege has just released the album Black Renaissance Woman which features recordings from previously underrepresented composers such as Florence Price, Margaret Bonds and Nora Holt. On Sunday she presented a feature on BBC Radio 3 about Florence Price’s Chicago and the Black Female Fellowship. Later today, she will be performing a lecture-recital on the work of Florence Price and she will give the UK premiere performance of Price's Piano Concerto in One Movement arranged for two pianos, performed with Dr Nicole Panizza. And in May she will be performing Chamber Music from the African Continent Diaspora at the Sheldonian Theatre with the group Castle of our Skins.

Professor Suzanne Aspden has recently returned to the airwaves on The Birth of British Music which is being re-broadcast on BBC 4. You can hear her on the second episode, which is available to listen on iPlayer.

In January Dr Leah Broad presented a BBC Radio 3 documentary which uncovers the stories of three marginalised 20th-century women composers. She will be speaking at a pre-concert talk on the 19th March on Ethel Smyth, on forgotten women composers in Oxford Lieder events on the 20th, and on Rebecca Clarke at Britten Pears Arts in May.

Our Director of Performance Rosalind Ventris is a member of the the Kaleidoscope Chamber Collective, who have been nominated for a BBC Music Magazine Chamber Award for a recording of Florence Price, Amy Beach, and Samuel Barber. They will be performing works by Price and Beach on BBC Radio 3's In Tune on the 16th March and at the Wigmore Hall on the 18th March. Rosalind is also recording a CD of works by women composers which will be released in the summer and you can hear the works performed at the Dublin International Chamber Music Festival in June.